You want a Thanksgiving folks are going to remember? And no, I don’t mean like the time your sister-in-law announced she wanted a divorce just as you were serving the pumpkin pie.

I’m thinking food, people. You know the turkey, the stuffing, the mashed potatoes and gravy. I bet if you jotted down a list of favorite Thanksgiving foods, somewhere near the bottom, (just above Brussels sprouts) would be cranberries. Because try as you might, you never hear someone say is: “My Thanksgiving? It was great. You won’t believe the cranberries they whipped up.”

The problem is that cranberries are an afterthought, a balm to assuage our guilt at having consumed enough calories to feed a small island nation for a month. Kids hate them and adults push them around on their plates hoping they’ll go away.

But cranberries aren’t bad – they’re just boring. Or until now. Because at the Chile Trail we like nothing more than a challenge. So we’ve created a souped up cranberry recipe that will have you moving our fruity friend to the top of the list. And it’s simple. SIMPLE! And you can do it ahead of time.

No need to thank us. Just consider it an early Christmas present.

This isn’t hot. The chipotle adds a nice, rich smoky flavour and the lime gives it a zippity-do-da flavour. If you want heat, add in a bit of chile powder to taste.

Zest of a lime 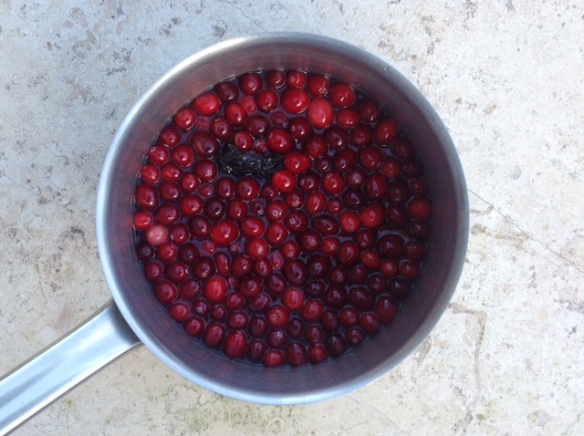 Put the cranberries, sugar, water and Chipotle chile in a saucepan. Place on medium-high heat and give the mixture a stir. Bring slowly to a simmer, stirring occasionally or when the mood strikes you. The cranberries should plump up and soften but remain whole and the chile will soften. When it’s coming to the boil, remove from the heat and stir in the lime zest. Taste and add a squeeze or two of lime juice – it lifts the cranberries but don’t overdo it. Cover the pan and let it sit to cool. Place the relish in a container – you can keep the chile pod in the mixture – and store in the refrigerator until ready to serve. Make this a couple days in advance as it gives the flavors time to mingle and get to know each other.