It’s here. It’s time. No excuses. Feel the burn. Yep, it’s barbecue season. The thought of lighting up the barbecue fills people with either 1) joy or 2) abject fear. Now don’t get me wrong – the joyful folk aren’t necessarily the best at the grill. They may like the stuff of a bbq – the smoke, the super-sized tongs, the apron which says something marginally inappropriate on it, the requisite adult beverage.

But these same souls may be the ones who get started telling a story only to find that their T-bone (which cost more than a mid-sized car) has turned to ash. The abject fear folk either shy away from barbecuing altogether (they tend to stay inside and microwave during the summer months) or they feel the fear and do it anyway.

Sometimes, these are the best at the barbecue. They approach it with reverence, with respect and with a healthy dose of fear. Because, let’s face it folks, you’re cooking with fire. Literally. If you feel a tad cautious then hats off to you. You’re cooking food over flames and if you think about it that’s got more than a hint of danger to it.

So for both you joyful and fearful folk we salute you. Get yourselves sorted before you light up and you’ll be one, two, maybe three steps ahead of the game. For this recipe, we marinated chicken thighs with Chipotle rub & mix but our Firecracker rub or Jamaican jerk mix would be ace too. For the barbecue sauce, we’ve used two dried chiles – a chipotle and a cascabel. As they say double the pleasure, double the fun. Enjoy!

If using wooden skewers, place in a bowl and cover with water so they won’t burn on the barbecue.

Cut the chicken thighs into cubes. Mix together the lime juice, oil and Chipotle rub & mix in a bowl. Add the cubed chicken and stir to coat. Refrigerate for several hours.

To make the barbecue sauce, place the two chillies in a bowl and cover with hot but not boiling water. Allow to sit for 15 minutes or so until they are rehydrated and soft. While they’re rehydrating, heat up the vegetable oil in a small saucepan. Add the onion, cover and cook over medium-low heat until soft but not brown. Add the garlic and cook for another minute.

Take the chillies out of the water, deseed them and remove the stem. Place the chillies in the saucepan with the onion and garlic, add the ketchup, lime juice and one tablespoon of the cider vinegar. Cook over medium heat for 10-15 minutes. Taste and add more vinegar if it needs more sharpness. You can add a pinch of brown sugar as well if the ketchup isn’t very sweet.

Remove from the heat and either remove the chillies or if you like more heat, puree the whole mixture. 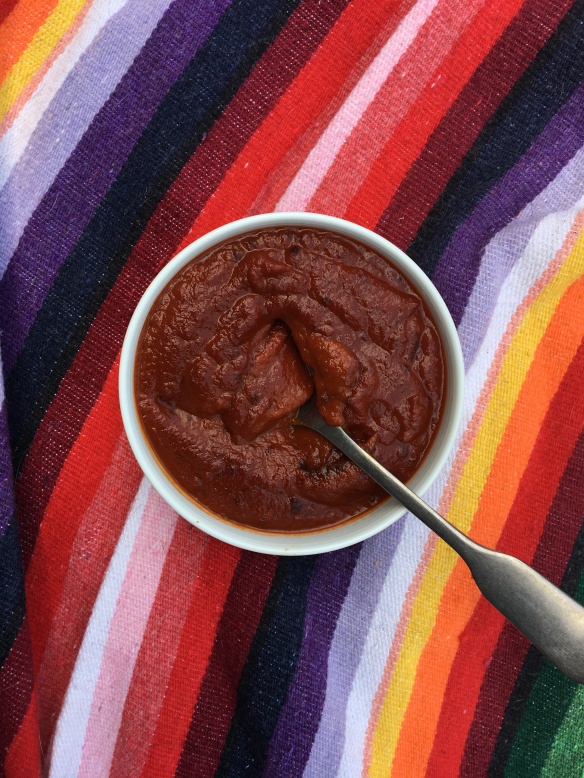